1. What are the different phases of normal wound healing?

The healing of acute traumatic or surgical skin wounds involves a complex and unique process. To understand the general principles of wound healing, it is easier to approach the topic by distinguishing the different successive phases, although keeping in mind that they overlap in time and space (Figure 1) [1, 2]. It is also important to understand that these different physiological stages are disrupted in chronic wounds subject to delayed healing. 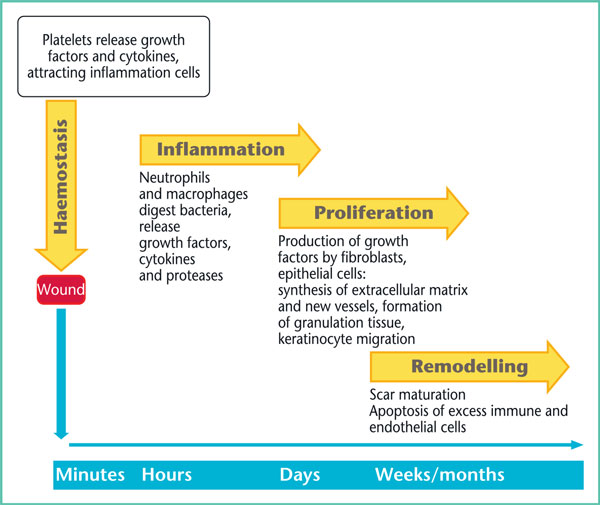 The first phase following wound formation is haemostasis and the formation of a temporary matrix. This phase consists of a succession of cellular and molecular mechanisms that allow not only coagulation to reduce bleeding but also involve multiple cytokines and growth factors that promote collagen synthesis, angiogenesis and even re-epithelialisation.

This is followed by an inflammation phase that begins with a primary inflammation stage, involving the recruitment of neutrophils, followed by a secondary inflammation stage during which monocytes are transformed into macrophages. In the first few days, neutrophils play a major role by combating bacterial aggression, helping to break down necrotic tissue and attracting other inflammatory cells. Approximately three days after the injury, macrophages become the primary cells of healing, through their ability to destroy cellular debris and synthesise numerous growth factors that stimulate the next proliferation phase.

Damaged tissue is rebuilt during the proliferation phase, along with re-epithelialisation and the formation of the vascular network. This crucial stage takes places during the first few weeks and results in the formation of granulation tissue. Re-epithelialisation is achieved by keratinocyte proliferation from the margins of the injury, which have the ability to migrate within the forming matrix, and by epidermal stem cells located in the “bulge” area of hair follicles (Figure 2). Physiological proliferation is achieved through a balance between degradation and synthesis of the extracellular matrix. In pathological scars, this balance becomes imbalanced in favour of degradation, in cases of delayed healing, and in favour of synthesis, in keloid and hypertrophic scars.

Finally, during the maturation phase a series of changes occur to components of the extracellular matrix starting about three weeks after the injury and lasting for up to two years, which is why the “final” appearance of a scar can only be assessed after this time. Collagen reorganises and remodels itself according to the traction stresses placed on the wound but it will never have the same intertwining appearance as that of uninjured skin. In addition, sweat glands and hair follicles are not reconstructed, which is why healed skin is never identical to the original skin. Finally, since melanocytic proliferation occurs at a later stage, the scar will initially appearpaler than the rest of the skin.

>> 2. What are the main factors involved in delayed wound healing?
© John Libbey Eurotext, 2021 This work may not be reproduced in whole or in part without the permission of the publisher or the Centre Francois d’Exploitation du Droit de Copie (CFC), 20, rue des Grands-Augustins, 75006 Paris, France.

With the institutional support of the laboratories