15. What is a pathological scar and why does it develop?

Healing as described above represents the physiological model of normal healing. In some cases, however, when healing does not occur normally, this is referred to as a pathological scar which can result from either delayed healing (leading to a chronic wound) or an excess scarring process (Figure 8). 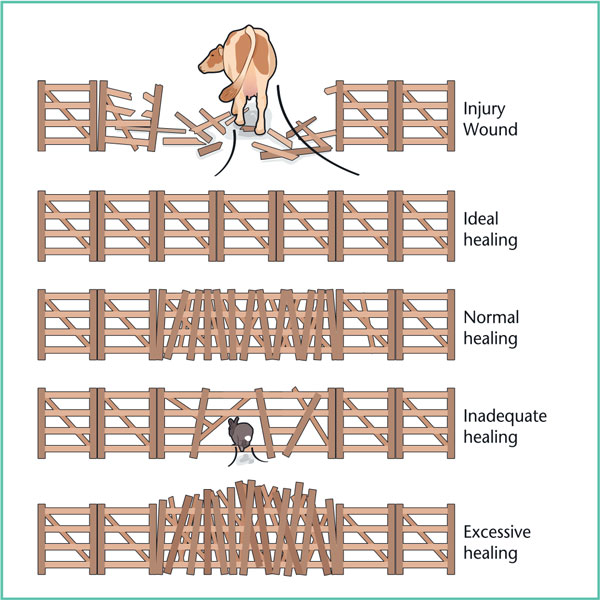 There are two clinical forms of pathological scar healing: hypertrophic scars and keloid scars, which have an identical initial phase of healing called hypertrophic. However, their progression differs: simple hypertrophic scars progress favourably over 12-18 months, usually in the form of a larger scar. While keloid scars do not tend to improve spontaneously.

Due to excessive scarring, a hypertrophic scar is thick, erythematous and often pruritic (Figure 9). Unlike keloid scars, however,it is limited to the area of injury and does not extend beyond it.

Keloid scars are characterised by excessive activity during wound healing, resulting in thick, hyalinised, disorganised and excessive collagen fibres (Figure 10) [8]. Thus the extracellular matrix is abundant, while cellularity is low. The appearance is described as being like “crab claws”, extending beyond the initial scar bed unlike hypertrophic scars.

We still do not really understand the mechanism that causes keloid scarring. Several hypotheses have been suggested such as prolonged activation of the proliferative phase of fibroblasts, decreased apoptosis, an increase in metalloproteinase inhibitors and lower collagenase activity.

Several risk factors for the occurrence of these scars have been identified such as having a dark skin type, hormonal factors (occurs more frequently during pregnancy and puberty), orientation of the wound in relation to skin tension lines and location of the wound (Figure 11). 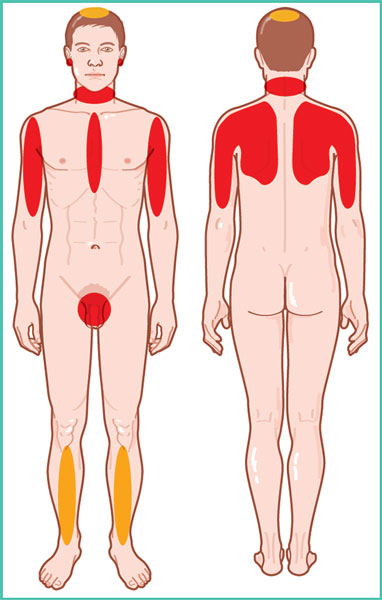 Figure 11. Location of keloid scars.Fre- quent in red and rare in yellow.

<< 14. What advice should be given to patients to achieve an optimal scar (postoperative and post-trauma)? >> 16. How do you treat pathological scars?
© John Libbey Eurotext, 2021 This work may not be reproduced in whole or in part without the permission of the publisher or the Centre Francois d’Exploitation du Droit de Copie (CFC), 20, rue des Grands-Augustins, 75006 Paris, France.

With the institutional support of the laboratories